So today was planned as a day of rest, but the fishermen among us and a couple of hopeful hikers decided to head to the nearby (20k) huge and beautiful Los Alerces National Park. Some of us stayed back at our splendid Hosteria El Trebol (The Shamrock). As things turned out , those who stayed were ahead. No fish were caught or released, and the taxi dropped the hikers at the wrong site. Everyone, though, seems to have had a good time.

A surprise lay in store for those who stayed. Outside on the dusty gravel road (El Trebol is about 2 miles from the town of Cholila) came the sound of hooves, and first it was a runaway horse, chased by a woman on a bicycle; then it was an entire herd of cattle, helped along by Gauchos, moving slowly along on horseback with their chaps and ropes and rebenques, or leather whips. Throughout the day the road remained a major source of interest and amusement.

Those of us who hung around the house got some work done, washing the heavy dust and grime from the bikes, taking care of laundry, or just hanging out. Late in the day the fishermen and hikers returned, and we gathered for another stunning meal cooked up for us by our 82-year old hostess.

Tomorrow is a big ride, 80km (50mi.) through the Alerces Park and all the way to Trevelen on mostly unpaved roads. 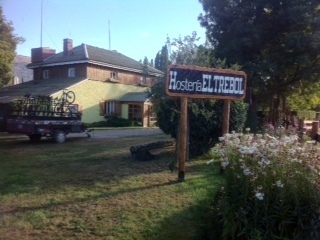