Day 13 – Wednesday March 9: Westward Ho: Chile, Futaleufu; hey, is it windy in here or what?

And I don’t mean the blog. Today began with an excited after-breakfast rush to put fenders on the bikes because it had begun to rain in Trevelin. To everyone’s relief Ray recovered enough to give our trip to Futaleufu a go. It promised to be a relatively short ride – 54k (about 32 miles), though there would be the border control to deal with. All suited up, we left La Estancia hosteria by 10:30, setting off westward along the pitted gravel road. The scenery changed now from the blue and green glory of the lake district to more sere golden fields, farms and ranches.

The road snaked its way upwards slowly through the diminishing rain, and we took it easy. Far in the distance lay ranch houses perched on hillsides, and eventually we reached a narrow pass of sorts, a slot through the mountains, and, predictably perhaps, the headwind picked up. After some 42k we crossed a Rio Grande – very grande – and suddenly there was the border. It took longer than we anticipated to get through, facing both Argentinean and Chilean border guards. At the Chilean station we made a good friend of a border guard, Marcos, who educated us about a terrible river infestation in Chilean rivers called didymo. Dreadful stuff transferred by anything that moves from one river to the other, like fishing gear. The good news at the border was that Futaleufu was only 11k away and the road was completely paved.

Initially exuberant, we soon discovered that Chilean roads seem to be built to quite different standards than Argentinean roads. In Argentina the grades are never steep except in the national parks; here the grades simply follow the contours of the land, and that means some very serious grades. Plus the serious headwind on this road. Still, Futaleufu appeared soon enough and we moved into the little cottages of La Escondida.

The small town of Futaleufu, it turns out, is famous worldwide for kayaking and rafting on the sometimes raging Futaleufu river, still a wild and scenic and largely remote watercourse. With this news in fact, by dinnertime we had changed our plans for the following day travel. 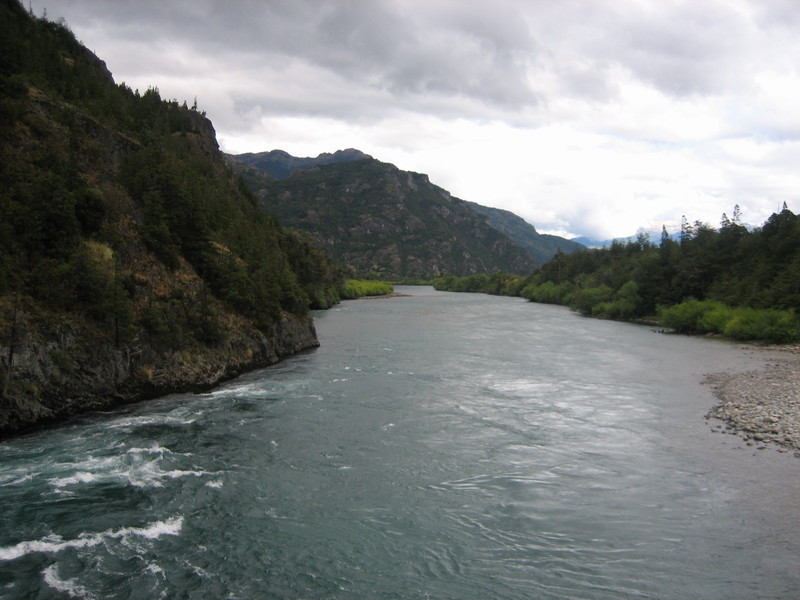