We began early, screaming down a steep grade into Santa Lucia, 70km from La Junta, where we thought our next night’s stay was located. Later we were to be disabused of that notion. In the meantime the road was unpaved but reasonably well-graded; the weather was cool but not raining, and we made steady progress along relatively flat terrain. Winding its way along a river valley, the road dipped and rolled with the scenery, with mountains ranging off in the distance and forested foothills on either side. Two dogs from Santa Lucia – a large brindle and a small terrier – followed us for miles, happily running alongside the bikes. Oddly, towards the end the larger dog seemed exhausted while the little guy kept scampering gamely on short legs. On our entire trip we have yet to meet an unfriendly dog.

Two or three hours into the ride, near the top of a long dusty grade, we came across a small tin-roofed cabin with a fenced yard and a sign proclaiming “Fundo Violeta” and another one promising “English spoken here.” There were chickens in the yard and cats on the porch. Otherwise it seemed deserted and we stopped if only to get a picture. But as we approached we heard music blaring from inside, so we mounted the steps and knocked. The door was opened by Violeta herself, a welcoming woman with plenty of frizzy black hair that she unsuccessfully tried to secure in an unruly bun. Clearly she lived alone in the small cabin, sleeping on a narrow cot near the stove. As our party arrived by bike and truck and trailer we all piled inside for some fresh Nescafe, the perfect cheerful late morning break. Forty five minutes later we left in a great mood. From Violeta’s, by the way, I’m sending a picture of Tom trying on a hat in his continuing search for the perfect one.

So time passed and we pedaled on; about 30km outside of La Junta we took a short break for lunch, and as we stood eating our sandwiches and drinking the mysterious blue fluid supplied by our guides, we spied a couple of bicycle riders approaching from the opposite direction. The first, a woman, passed by without stopping, but the young man a few hundred yards back pulled up to chat. He was Israeli, like Danny who came on our rafting trip, and he was traveling for six months through South America by bike. I noticed that he was really thin (who wouldn’t be, pedaling with that load), and as we talked he kept eying our slices of ham and cheese intently. Early on someone offered him and olive, which he snapped up, but I could see that he kept watching the tray with unusual interest. Then the food was gone; we said goodbye, he pedaled away and we pressed on.

After what seemed like a long time later the road began to climb in a more pronounced fashion, and finally, after a long downhill and a quick shot across a new orange bridge, we arrived at the edge of the village of La Junta. Alas, there was bad news:  our hostel, La Suena, still lay 16km away, off on a side road. So we pressed forward again, passing the spectacular scenery of Lake Rossilot until we came to a small stony lane leading upwards to the left. This was it: the sting in the end of the ride’s tail. We groaned our way steeply upward (too steep to haul the trailer) a little over a kilometer to find a strangely Alpine scene:  a meadow set on a shelf overlooking a river valley and surrounded by towering snowcapped peaks. Here was the farmhouse of La Suena, a farm covering thousands of hectares, mostly still wooded. The celebratory beer was delivered to the sunny deck where we basked in wonder.

There were sheep and cows in the fields around, and a couple horses, plus a vast chicken coop and a greenhouse. The place was clearly self-sufficient. Just down from the main house was a structure that had windows looking out over the valley below and, inside, a huge cement-lined fire pit with a metal hood perhaps seven feet wide and five feet deep. A long table with benches on either side sat next to the windows. This was where supper was to be prepared and eaten, and we watched as our host spitted huge pieces of lamb and began to roast them over the fire. Hours later – at 9:00 – we began our most memorable feast so far. Fresh lamb, done to perfection, with all the trimmings.

Finally we retired, greasy-faced and smiling. This had been our longest day so far:  93km. And we’d need our rest for the next day’s ride, which was now 16km longer than we had anticipated. 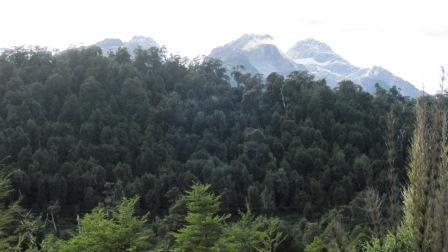