Our first day on the road, at last. A relatively short ride, as these things go: 40km from Bariloche to Lago Mascardi, a large beautiful lake where we expected to camp out. We didn’t get away until almost 11:30; then we threaded our way off the main road to a spectacular side road that ran across private boating and skiing clubs. We ran out of pavement after about 8km and headed up a steep gravel road that went on for 5km, then back to pavement for the remainder of the trip. Glorious weather; David and Dario – our “keepers” along with the driver Anibal from Dirty Bikes in Bariloche (who was accompanying us with the Dirty Bike trailer for the first few days) stopped and made us lunch, so we felt greatly pampered. The ride, in short, was splendid. And it was over by mid-afternoon.

We arrived at the “camping” site at Lago Mascardi to discover that we actually were sleeping in little connected cabin rooms with four bunks in each, rather than tents. There was a rudimentary restaurant serving food and drink in a lush setting. A short distance down a nearby trail lay another lake, which attracted the fly fishermen in our group (Steve, Tom, Ray, Bram). They gathered up their gear and hiked off excitedly, while the rest of us considered the afternoon or napped. No fish were caught or injured in either exercise.

The people in charge of the camping site made us a delicious pasta dinner as the light faded. Candles appeared and we finished off the evening with an early bedtime, resting up for the second day’s ride. 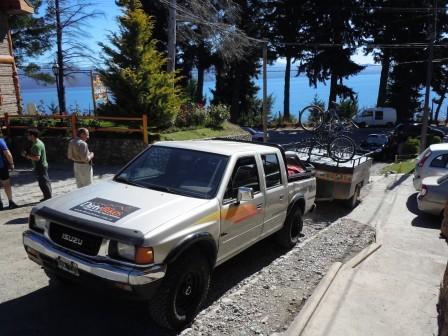